Demon savior of the earth

It is a demon that was sent to earth to destroy it but along what they lead that left behind that goal and now protects it from all evil and together with Lily, Maxwell and others later it would face Sonicphatom47 for which they would have a rivalry At the beginning and then after Aliarze and face Firefreezen and after that Deadskullable goes to confront Satan to know the Truth and discovers that he is a Brother of SonicPhatom47and this returns him to hell after that along with Sonic and the others will protect the Earth from the evil of his father and other threats.

The demon lord of the Underworld, Sonicphantom47, and the lord of Hell, Deadskullable, are forced to fight when a terrorist from Hell tricks them into fighting an ultimate battle. Will their fight and end up destroying each other and the world, or is there a way for them to stop fighting each other and fight the real enemy instead.

Months after the demon children Sonicphantom47 and Deadskullable defeated Firefreezen, the world has returned to normal and the two have become best friends. However that does not fit well with Deadskullable's father, Satan, who has recruited demon lords to wreck havoc on the world. As the two battle the demons, they are soon to learn more about the truth between their unique bond.

Just as everything looked like it was back to normal, trouble returns. Deadskullable and Lily have disappeared and a demon named MrTheAmazingDude has risen from the ashes of Firefreezen and has recruited a rogue army general to help him with his goal, to spread chaos all around the world. Now Sonic and the others must save Deadskullable in order to stop this chaos from spreading.

The fourth installment. Just as things go back to being less chaotic, Lorgio is murdered by an unknown assassin. As a new candidate named Kevin Green aims towards becoming the new president, little do the two demons heroes know that he plots to get rid of them both for good by making himself the new world hero. Now to fight against him, Sonic and Deadskullable may need the help of their friend who is dead.

Dark Fantasy is an audio-drama series owned by DeadSkullable, loosely based off one of my favorite video game franchise, Final Fantasy, and even based off his channel and his Trailer series.

The son of devil, DeadSkullable has set upon the Earth to have his own destiny to enslave around humans. But until there was something more than that, the lord of the dark oblivion, Necrodus, is unleashing his dark powers to make the world into pure darkness. Now DeadSkullable needs help from Lily Cabral, Maxwell Awesomes and Clara Welch, Fargo and Thomas Cabral working together to go on a journey of stopping Necrodus' doom.

The first installment of the Dark Fantasy Universe franchise. SonicPhantom47, his origin begins having Hades as his adoptive father, but he escaped Underworld for not willing to steal souls from Hades clutches. He went on with his life of pretending to act like a human. Until the fallen son of Zeus, Ares arrived and began cause chaos on Earth. It's up to SonicPhantom47 to stop him and save the world with the help of Clara Welch. The demon lord of the Underworld, SonicPhantom47, and the lord of Hell, DeadSkullable, are forced to fight when a terrorist from Hell tricks them into fighting an ultimate battle. Will their fight and end up destroying each other and the world, or is there a way for them to stop fighting each other and fight the real enemy instead. Fargo had a history for his life of being an assassin.

DeadSkullable received a strange message from a 1930's asylum which was abandoned, he goes investigates the mysteries inside through discovery secrets in a hidden message. But something was unusual who questioned DeadSkullable, it's up to him finding out the outgoing messiah. 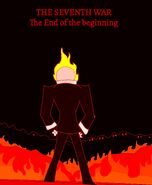 Add a photo to this gallery
Retrieved from "https://herofanon.fandom.com/wiki/Deadskullable?oldid=47643"
Community content is available under CC-BY-SA unless otherwise noted.