Luigi is the younger brother of Mario and one of the two deuteragonists of the Australian adult-animated web series SMG4 (alongside Meggy Spletzer). He serves as the person who prefers trying to peacefully solve problems (often they don't work out, while Mario rushes on, using violence as his method of doing things. Luigi is frequently maltreated and humiliated by his peers, most notably Mario which is a running gag throughout the series.

Unlike the other characters in the franchise, Luigi is much nicer and open-minded who uses common sense more than his allies and enemies alike and is usually very cheerful, willing to help others, and full of enthusiasm. While he is smarter than Mario, sometimes even he does some stupid acts himself.

Similar to his Nintendo counterpart, he is very cowardly, as he is deathly afraid of ghosts and just the sight of them is enough to scream and run in fear, unless his brother or his friends are in serious danger and must act to save the day. Unlike his canon version, this Luigi's cowardice is exaggerated to the point he is afraid of Goombas (which are obviously weaker and easy to defeat) and him being a lot less competent at times. Due to being the butt of everyone's jokes, abuse, and frequently overshadowed by his older brother, Luigi is shown to be very bitter and insecure about himself; even SMG4 felt sorry for him for having to go through several misfortunes that come his way. Like everyone else, Luigi gets very annoyed and frustrated with Mario's idiocy and had to take up several jobs to pay for all kinds of damage Mario causes.

Being the kinder person he is, Luigi is not without his limits, should he be pushed past them, he can get really mad unrelentingly and will fight back and will actually put his foot down with the offending person. He calms down pretty quickly and returns to his normal self afterwards.

In spite of his flaws, Luigi cares a great deal about his friends and he is willing to sacrifice himself to protect his friends under extreme circumstances. There are times when he gets along just fine with Mario (when he is sober) and several others in and outside the main cast. 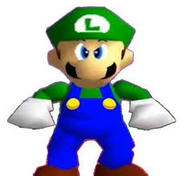 Add a photo to this gallery

Retrieved from "https://herofanon.fandom.com/wiki/Luigi_(SMG4)?oldid=42380"
Community content is available under CC-BY-SA unless otherwise noted.