Meggy Spletzer, better known as Meggy, is the tritagonist of the Australian adult-animated web series SMG4, serving as the titular protagonist of the 2020 film Meggy's Destiny: An SMG4 Movie. She hailed from the city of Inkopolis where she was born and raised. She is an extremely competitive tomboy who loves to take part in sports and competitions, but her most favorite sport is a Turf War which her main goal is to become the top athlete.

She was once in poor terms with Mario in her debut episode, If Mario was in... Splatoon, but later became close friends with him. Meggy is one of the few people whom Mario is unconditionally kind and supportive towards (more than his younger brother, Luigi) aside from his occasional teasing directed towards her.

In the Anime Arc, she was transformed into a human after all her ink was zucced out of her by Francis.

After the YouTube Arc, she was voice by Lizzie Freeman, who also voiced Trish Una in English Dub of JoJo's Bizzare Adventure: Golden Wind.

Meggy is a spunky, outgoing Inkling girl who has been on many adventures with Mario. Her most known trait is her competitive streak as she is more than willing to take on any challenge thrown at her, no matter how deadly they are and has a thirst for victory, which shows in Mario's Challenge, which shows she is concerned more about the challenge than she is about the prize that Mario is offering. She has a poor habit of getting arrogant, with her trying to do things herself when she obviously needs her friends' help and when she blindly jumps into the situations without a second thought and quickly winds up landing into trouble or worse.

She is very smart and strategizes on problem solving and defeating villains in contrast to the other characters who tend to act before they think which cause more problems than anything else, however she acts on impulse herself, usually with terrible consequences. She always willing to help her friends in any way she can, and proves herself to be a formidable opponent.

Meggy is aware of her own abilities and has a knack for taunting anyone who believes she is cheating when she isn't, usually with gestures and making snappy remarks. A good example is in Mario's Challenge, where she gives Heavy the peace sign gesture after successfully shooting a bull's eye, earning her a pass. This annoys Heavy to the point where he tries to shoot the target but repeatedly misses, leading to his disqualification. She enjoys stupidity-based jokes as she, unlike other characters, sometimes finds Mario's idiotic antics to be funny.

She also seems to have an insecure and sensitive side as she would lose her confidence when she loses or she is saddened when something terrible happens to someone close to her, such as Desti, who was her rival, who was killed by Francis. It is basically Mario who helps bring her back up and comfort her.

Transformation: As with any other Inkling, Meggy has the ability to turn into squid form and dive into big puddles of ink only of her color so she can get around from one place to another. After turning into a human, Meggy likely lost this ability.

Uncanny Accuracy: Meggy is an incredible sharpshooter, as she can hit bull's eyes at any range. What's more incredible is that she can hit targets without even looking. This is shown many times. 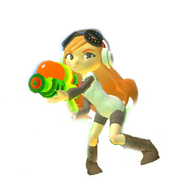 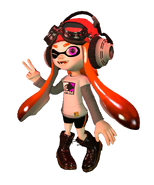 Meggy in the water

When Meggy was a Toddler
Add a photo to this gallery

Retrieved from "https://herofanon.fandom.com/wiki/Meggy_Spletzer?oldid=55983"
Community content is available under CC-BY-SA unless otherwise noted.