Same as both the Mario Bros.

Stop SMG3 from taking over his channel (Succeeded)

He is predominantly a Super Mario 64 machinimist, as well as Mario's closest ally (rival in the War of the Fat Italians series), the de facto of his gang, and the arch-enemy of SMG3. He also used material from Minecraft, Garry's Mod, and other media. SMG4 devoted a lot of his time to making these videos, usually uploading a new video every weekend, and sometimes accepts works such as fanart from his channel's viewers and subscribers. In his videos, he often used quotes, music, and stuff from other famous YouTubers like PewDiePie and Smosh as well as from movies, video games, memes, or TV shows. He is also the oldest original character in the series.

SMG4 heavily practiced self-insertion, as he usually appeared as a blue and white lookalike of Mario. From his debut, SMG4's character had been passionate and protective of his work; that aside, he seemed to play the sane man who is often annoyed or shocked by Mario's crazy, flamboyant idiocy. Despite this, they were friends in most videos, especially in the recent ones.

Unlike Mario, SMG4 is the sane, sophisticated, and level-headed of the group and has to bear the burdens of other people's stupidity, especially as he often lacks patience with Mario's antics, getting annoyed when Mario acts like an idiot when he or someone else needs his help the most, especially when his stupidity makes the problems worse than they are; however the two remain good friends regardless. Even with his intelligence, he has occasional idiotic moments himself as he was scammed by Wario and Waluigi at one point. SMG4 does get caught up in all kinds of adventures with his friends and tries very hard to strategize and keep the peace, even if it doesn't always work out, especially with his friends', and at times his own flaws getting in the way.

SMG4 seems to be very anti-social, as he prefers doing his own thing, like creating memes and funny videos over spending time with his friends. He is very protective of his work and doesn't take kindly to anyone tampering, ruining, or even touching it, which will set him off.

Nonetheless, SMG4 really cares for his friends and will put his work aside for the greater good and join them on their crazy adventures whether for fun or stopping various villains from bringing their plans to fruition. He also disapproves of Mario abusing his younger brother Luigi, although he doesn't interact with him very often. While he tends to be cold towards Luigi, he shows sympathy for him being the butt of several misfortunes other than being forgotten and beaten up.

SMG4 has an appearance very similar to Mario, with white gloves, brown shoes, a black mustache, brown hair, blue eyes, and a round nose. The main difference is that he wears a blue hat with a red "M" on it, a blue shirt, and white overalls with yellow buttons. 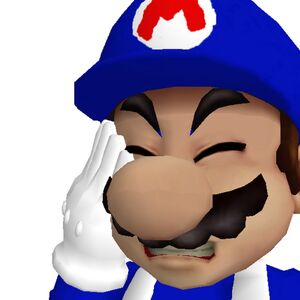 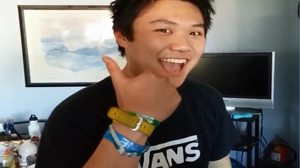 SMG4 in real life.
Add a photo to this gallery
Retrieved from "https://herofanon.fandom.com/wiki/SMG4?oldid=54657"
Community content is available under CC-BY-SA unless otherwise noted.